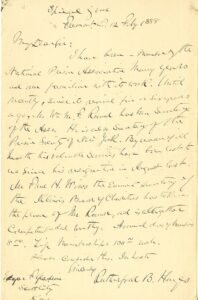 A FINE, AUTOGRAPH LETTER SIGNED —  ON PRISON REFORM, A TOPIC THAT HE WAS TO PASSIONATELY EMBRACE IN HIS POST PRESIDENTIAL YEARS

“My dear sir: I have been a member of the National Prison Association many years and am familiar with its work.  Until recently, since its revival five or six years ago, Mr. Wm. M.F. Round has been Secretary of the Assoc.  He is also Secretary of the Prison Society of New York.  By reason of ill health his valuable services have been lost to us since his resignation in August last.  Mr. Fred H. Hines the eminent Secretary of the Illinois Board of Charities has taken the place of Mr. Round, and is altogether competent and worthy.  Annual dues of members 5.00.  Life memberships 100.00 each.  Please consider this.  In haste, sincerely, Rutherford B. Hayes”.

After the contested election of 1876, Hayes is not often seen as a President who had accomplished a great deal in his Presidency.  His election marked an end to Reconstruction, and a further review of the historical record would show he was foremost a supporter of social causes, particularly education and civil rights, regardless of race.    Closely linked to this was his strong interest in prison reform, and he issued multiple pardons while in office, and came to oppose the death penalty.  He noted the power of education when it came to criminals, and linked crime to poverty, and believed that education could reduce criminal activity.   While we, today, are accustomed to Presidents remaining active in social causes, in Hayes’ time it was almost unheard of.  Hayes was one of the first presidents to actively speak out on causes he believed in, after he left office.

Between 1890 and 1891, he adopted prison reform in an increasingly public way.  He went on multiple speaking tours.  He addressed the Cincinnati Prison Congress in September 1890 and then spoke in Chicago and cities in Ohio, in the coming months. In November of 1890, he addressed the Chicago Congregational Club, reflecting on many issues, among them reform of the nation’s prisons.  As a result of this, people nationwide who were interested in this cause contacted Hayes for his thoughts on this subject, a subject on which our letter reflects. This is a letter with content and substance not often encountered, and thus worthy of inclusion in the finest of Presidential collections.