QUEEN ELIZABETH II, JUST 4 MONTHS INTO HER NEW REIGN, APPOINTS A COMMANDER IN THE ORDER OF THE BRITISH EMPIRE, WITH HER GRANDMOTHER, QUEEN MARY ALSO SIGNING THE DOCUMENT AS GRAND MASTER.

A RARE COMBINATION OF SIGNATURES TO BE FOUND TOGETHER.

ELIZABETH II (1926-2022). Queen of England and regnant of the Commonwealth realms. Partially-Printed Document Signed, “Elizabeth R,” as Queen, less than 4 months into her new reign, at upper right. Embossed Seal of Elizabeth II at upper left margin. One page, large folio. [12 ¼ X 15 ¼ inches, this is the rarer large size document of that era ] June 5, 1952.  Also signed by her grandmother, Queen Mary, (Mary of Teck. 1867-1953), the wife of King George V, as ‘Grand Master’ of the Order. Mounting traces on verso, else fine condition.  The document, which grants the Dignity of an Ordinary Commander to Leslie Charles Bingham Penwill, Esq., reads, in part:

This is a most unusual pairing of royal signatures to be found together, given their respective ranks and titles at the time in which this document was signed by them.  Elizabeth’s father, George VI had died on Feb 6, 1952, and her Grandmother would die in March of 1953, 10 weeks before Elizabeth’s coronation.  Queen Mary would be the only Queen to see one of her grandchildren crowned monarch.  A superb association of names. 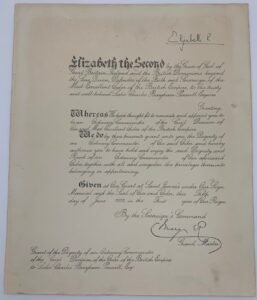