WORLD WAR II ERA PERSONALITIES.  A simply remarkable assemblage of dozens of prominent persons who have signed a guest book kept by a hotelier who ran an establishment near Oxford University in the years 1944-1948.   All are penned in a blue leather covered, gilt-imprinted guest book, with high quality paper pages that have places for the name of the individual and their address. Page size: 7 x 9 ½ inches.   The top of the page often bears an indication of the event the personality was attending, written in an unknown hand.  Some of the signers are:

Heading the top of another page is: 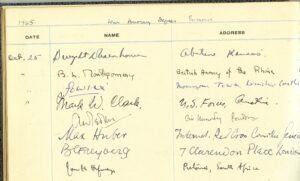 EISENHOWER, DWIGHT DAVID.  (1890-1969).  Supreme allied Commander in WWII, and 34th President of the United States.  He has boldly signed his name; “Dwight D. Eisenhower” and given his address as “Abilene, Kansas”, along with the date of Oct[ober] 25, 1945, on a page that is headed “Honorary Degrees Encaenia”   [Encaenia is the ceremony at which the University of Oxford awards honorary degrees to distinguished men and women and commemorates its benefactors.]  His humble use of his ‘home’ address as “Abilene, Kansas” simply speaks volumes about the character of the man.

Directly under Eisenhower’s signature is penned the signature of:

Then on the multiple pages that follow, we find:

CHURCHILL, SIR WINSTON S.  (1874-1965). Prime Minister of Great Britain.  [His Conservative Party had been defeated in the July 1945 general election, forcing him to  step down as P.M.]  His signature “Winston S. Churchill”, with his address given as “London” in his hand. —  His wife, CLEMENTINE CHURCHILL, has boldly penned her signature on the page opposite her husbands and has given her address at “28 Hyde Park Gate” [London].

ATTLEE, CLEMENT RICHARD. (1883-1967). [1st Earl Attlee, KG, OM, CH, PC, FRS]  British politician who served as Prime Minister of the U.K. from 1945-1951, and leader of the labor Party.  He was deputy PM in the  wartime coalition under Winston Churchill.  His signature penned at the top of the page opposite that of Churchill’s and LOUIS MOUNTBATTEN’s.  He signs “C. R. Attlee” and gives his address as “10 Downing Street”, the Prime Minister’s official residence.

CLARK, MARK W.  (1896-1984). American General in WWII; youngest 4 start general in US Army in WWII; responsible for establishing the ‘intelligence community’ for the US after the war years.    His signature: “Mark W. Clark”, and address given as “U.S. Forces, Austria”.

SPAATZ, CARL.  (A891-1974).  American General and Commander of Strategic Air Forces in Europe 1944, who pushed for the successful bombing of enemy oil production facilities as a priority in his attempt to shorten the war became Chief of Staff of the newly formed United State Air Force in 1947.

In addition to the above, there are many more signees on the pages which we have not listed.  One of the most interesting pages contains the entire Soviet Delegation to the World Trade Union Conference on February 3, 1945.  An account at the time reported the event as:’ The World Labor Conference held in London in February is the first indication of the configuration of the world labor as a consequence of the war.  Its main result is the entry of the Soviet trade unions into the newly established world trade union federation.  This inevitable reorganization of the labor movement is the first expression of the cardinal role which the Soviet Union is bound to play in the field of international labor.  Confronted with the alternative of cooperation with either the American Federation of Labor or the Soviet trade unions, the world labor movement has clearly made its choice.  It has – regretfully – abandoned the A. F. of L…and accepted…leadership on the part of the Soviet trade unions….”    [Current History, vol 8, no 45 May 1945) pp 385-390] .  Just a remarkable grouping in its own right! 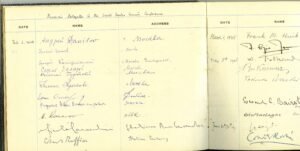 In our multiple decades of dealing with the finest in historical autographs, we can recall no other album of this type that so fully documents an important grouping of individuals of the WWII era, as this album does!  It is truly irreplaceable.   For more on this most remarkable piece, please email us.   Simply —  One of our “Best of the Best”.™