ULYSSES S. GRANT WRITES FROM WEST POINT ABOUT THE ELIGIBILITY OF AN ACQUAINTANCE HE’S SUPPORTED FOR CIVIL APPOINTMENTS IN THE PAST, TO NOW GET A NAVAL APPOINTMENT

“Dear Hillger, who ever informed the editor of the Herald that I have in any manner opposed your appointment as Naval Officer told what was untrue and what there was no foundation for.  As far as I allow myself to go in making recommendations, I have gone in your favor for the appointment alluded to, civil appointments I mean.  You are not the ‘oldest inhabitant’ but you have no other home but New York City and are unquestionably as eligible for officer as any other citizen.  Yours truly, U.S. Grant   Lt. Genl.”

A boldly written letter that would make a great addition to any collection of Presidential letters. 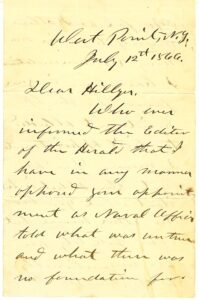