BOLDLY INSCRIBED BY HIM, AS PRESIDENT, TO THE MAN RESPONSIBLE FOR HIS POLITIAL CAREER, MARK HANNA – KNOWN AS THE ‘KINGMAKER’ OF OHIO AND NATIONAL POLITICS POST CIVIL WAR

MCKINLEY, WILLIAM (1843-1901).  25th President of the United States; assassinated in 1901. [He was shot on the grounds of the Pan-American Exposition at the Temple of Music in Buffalo, New York, on September 6, 1901, six months into his second term. He was shaking hands with the public when anarchist Leon Czolgosz shot him twice; he died 8 days later.] The book:  SPEECHES AND ADDRESSES OF WILLIAM McKINLEY FROM MARCH 1, 1897 TO MAY 30, 1900, boldly inscribed on the half-title page:  “for Hon[orable] M A Hanna / with sincere regards / William McKinley / July 28, 1900”, as President.   New York, Doubleday & McClure.  1900.  First edition.  An elegant 3/4 brown morocco bound book with dark-green marbled boards, and gilt-decorated leather spine. Frontispiece engraved portrait of McKinley.  Some bleeding of the ink in McKinley’s inscription, yet very fine condition, throughout.  Books inscribed by McKinley are fairly scarce, in no small part because he was assassinated at the beginning of his second term in 1901, and those with any association value are extremely scarce.   A choice inscribed Presidential book, that would be an exceptional addition to any collection. 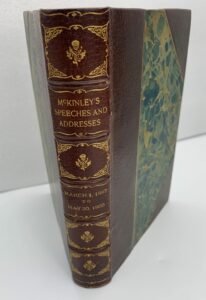 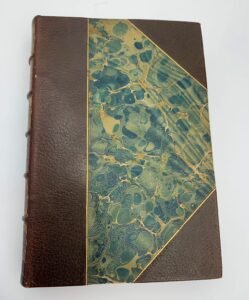