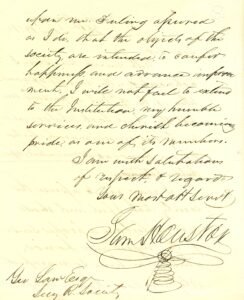 “Dear Sir, With much pleasure, I acknowledge the receipt of your letter of the 19th inst. apprising me that the ‘New York Rhetorical Society’ has unanimously elected me an honorary member of that institution.  I pray you to assure the society that I feel, and should now entertain a proper sense of the respect, and honor which, has been so unexpectedly, and courteously centered upon me.  Feeling assured as I do, that the objects of the society are intended to confer happiness and advance improvement, I will not fail to extend to the Institution, my humble services, and cherish becomingly pride, as one of its members.  I am with Salutations of respect, and regards, Your Most Obedient Servant, Sam Houston.”

Just an exceptional display letter.  Boldly written and bearing what is commonly referred to as the “I am Houston” form of his signature.  His full ALS’s, while once marginally available, are now quite scarce, in our experience, in the marketplace.  Housed in a custom leather clam shell case. This letter will make a fine addition to any collection! 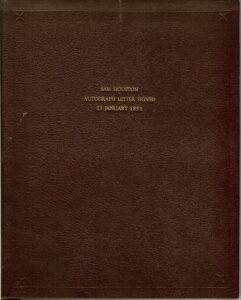