EXCEEDINGLY RARE AUTOGRAPH DOCUMENT SIGNED BY DR. JOSEPH WARREN WHO WAS KILLED AT THE BATTLE OF BUNKER HILL IN 1775

WARREN, DR. JOSEPH.   (1741 – June 17, 1775).   American physician and patriot who played a leading role in Boston during the early days of the American Revolution;  President of the Revolutionary Massachusetts Provincial Congress;  enlisted Paul Revere and William Dawes on April 18, 1775, to leave Boston and spread the alarm that the British garrison in Boston was setting out to raid the town of Concord and arrest rebel leaders John Hancock and Samuel Adams;  participated in the Battles of Lexington and Concord the following day, which are commonly considered to be the opening engagements of the American Revolutionary War; killed in combat when British troops stormed the redoubt atop Breed’s Hill, commonly referred to as the Battle of Bunker Hill.  An exceedingly-rare Autograph Document Signed, “Joseph Warren Dr” in the third person, in the body of the document.  One page, oblong octavo. Lightly silked for preservation, else very fine condition. No place, [Boston], January 1773.  Additionally docketed on the verso by his brother JOHN WARREN.  (1753-1815)  John was also a physician, who served in the American Revolutionary Army services in New York and New Jersey, and who was responsible for establishing the first formal medical classes at Harvard University in 1782.   Warren pens a request for remittance of his services to Col. Elisha Doane. (1725-1783). Doane was a Colonel of Militia, and Precinct Treasurer for Massachusetts, who had established a vast fortune and was among the richest men in Massachusetts during that period.  The document reads:

A simply superb Revolutionary War item, signed by both Warrens!    We can recall seeing no other medical related item from their pens, ever being offered. 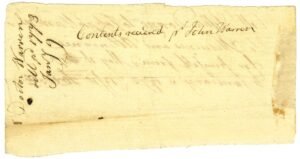