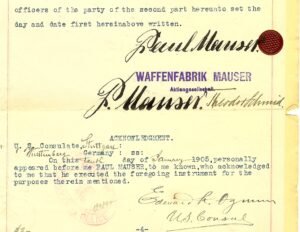 PAUL MAUSER, THE NOTED GUN DESIGNER AND DEVELOPER   —  TRANSFERS 16 OF HIS GUN PATENTS TO A U.S. MANUFACTURER  ~~ AN EXCEPTIONALLY RARE AUTOGRAPH

Von Lengerke & Detmold, founded in 1882, were New York dealers of guns and fishing tackle.  In 1928, they were sold to the well-known sporting company, Abercrombie & Fitch.   His letters and documents are exceedingly rare, and those with content of this type are almost non-existent in the market place, in our experience.  This is a superb item for the collector of fire arms related material or the Mauser enthusiast.