ABRAHAM LINCOLN  ~  PENS A WAR-DATE ENDORSEMENT IN FAVOR OF HIS FRIEND, SIMEON FRANCIS, IN WHOSE PARLOR LINCOLN ONCE COURTED  HIS FUTURE WIFE – MARY TODD

ABRAHAM, LINCOLN (1809-1865) President of the United States. Choice, apparently unpublished, nine line, War-date Autograph Endorsement Signed, “A. Lincoln.” One page, quarto. No place. “July 11, 1861.”  This document is penned vertically on the integral leaf of an autograph letter Signed by Ichabod Goodwin and addressed to Lincoln. With three holograph corrections in Lincoln’s hand and various other brief dockets by other individuals.  Goodwin’s letter is dated “Portsmouth, 24 June 1861.” One page, quarto.   Lincoln writes:

“I have written some letters in or notes in behalf of persons as Paymasters in the Army; and to-day I procured the name of Simeon Francis of Oregon to be placed on the list for nomination to the Senate – Next to this I am entirely willing for Capt. William A. Winder, of Maryland, shall be appointed a Paymaster in the Army     A Lincoln. July 11, 1861.”

Goodwin, a former merchant-seaman and railroad financier was completing his term as Governor of New Hampshire in 1861. Goodwin writes, in part:

“… my daughter … wife of Lieut. W.A. Winder … goes to Washington in behalf of her husband, asking that he may be appointed a Paymaster … Mr. Winder has seen much service, had been stationed for .. years in California. He is a native of Maryland and has passed most of his life in the states that are True as himself to the Union. This is the only favor I have asked for one of my immediate family, or connection, and hope it may be granted”

William A. Winder never received the appointment mentioned above, although he did serve with the U.S. Army’s 3rd Artillery from 1848 until his resignation in 1866. This document is especially interesting for the fact that Lincoln mentions his old Springfield friend Simeon Francis [(1796-1872) Founder, editor, and publisher of the Sangamo Journal (later the Illinois State Journal) a newspaper that supported Lincoln and served as his mouthpiece for more than two decades. After Francis sold the paper, he suffered a series of business losses and moved to Oregon. Once there, he appealed to Lincoln for assistance and was appointed an Army Paymaster at Fort Vancouver in August of 1861] Francis and his wife are widely celebrated in Lincoln lore for the crucial role they played in reuniting Lincoln and Mary Todd following their failed engagement. The second courtship of Lincoln and Mary Todd was also conducted largely in the Francis’ parlor!  Superb associations. 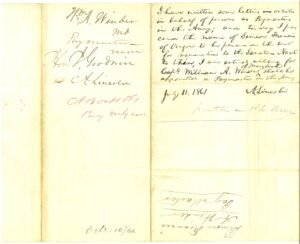 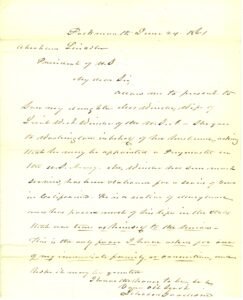