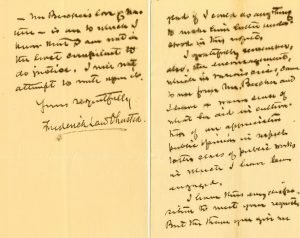 “I HAVE A WARM SENSE OF WHAT HE DID IN CULTIVATION OF AN APPRECIATIVE PUBLIC OPINION IN RESPECT…. OF [THE] PUBLIC WORKS IN WHICH I HAVE BEEN ENGAGED.”

“Dear Sir, Through all his mature life, Mr. Bucher was active in engaging the interest of the public in pleasure gardening in all its forms but most beneficially so in those available for people living in modest homes and under conditions of horticulture difficulty, with there he was, I believe, more in sympathy than the world has of late, been giving him credit for being and I should  be glad if I could  do anything to make him better understood in this respect. I gratefully remember also the encouragements which in various crisis, came to me from Mr. Bucher and I have a warm sense of what he did in cultivation of an appreciative public opinion in respect in useful & other class of public works in which I have been engaged. I have thus every disposition to meet your request. But the thesis you give me: Mr. Bucher’s love of nature–is one to which I know that I am not in the least competent to do justice. I will not attempt to write more upon it. Yours respectfully, Frederick Law Olmsted.”