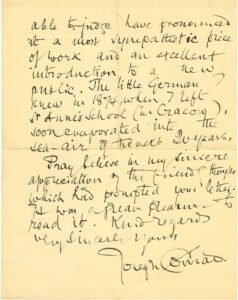 CONRAD, JOSEPH (1857-1924) Polish-born British novelist who is regarded as one of the greatest of English novelists; authored: Heart of Darknes, Nostromo, Lord Jim, The Secret Agent, and Typhoon, among many others.  Good [apparently unpublished] Autograph Letter Signed, “Joseph Conrad”, on his imprinted Oswalds, Bishopsbourne, Kent stationery.  No date, no place [Keent, U.K.]  Two full pages, quarto. To “My Dear Sir”.  Conrad writes:

“Many thanks for our letter and the parcel which arrived safely yesterday.  Need that dear Angela have bothered you?  I feel a certain compunction; but all the same I am glad of this opportunity to thank the writer of the preface to the German translation of  Western Eyes.   Friends able to judge have pronounced it a most sympathetic piece of work and an excellent introduction to a new public.  The little German I knew in 1874, when I left St. Anne’s School (in Cracow [Krakow]) soon evaporated into the sea-air of the next 20 years.  Pray believe in my sincere appreciation of the friendly thoughts which had prompted your letter. It was a great pleasure to read it. Kind regards, very sincerely yours, Joseph Conrad”.

Conrad’s Under Western Eyes, has been compared to Dostoevsky’s Crime and Punishment, with its exploration of similar themes.  Conrad letters with direct reference to his best know works are rarely found in the market place.  Superb condition.  An excellent boldly penned example, with truly fine content, and worthy of inclusion and any set of literary materials.