HOUDINI, HARRY.   [Professional name of Ehrich Weiss].  (1874-1926).  American magician.  Black-and-white octavo postcard Photograph Signed, “Harry Houdini,  S’field, [Sheffield, UK] Feb. 2, 1914”, across the darker portion of his image. [The contrast is still quite good].  Houdini is pictured in a three-quarter length bust pose, leaning against a banister rail post with one hand in his pocket.  Some oxidizing of the image around the edges, else fine condition. 1914 was the year Houdini experimented with his “Grand Magical Revue” in the UK, and on February 6th, Houdini did a plank escape on the stage of the Empire Theatre, Sheffield, South Yorkshire.       Houdini material is always in demand. 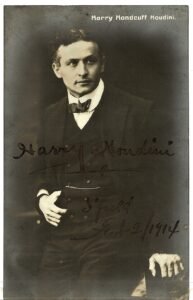