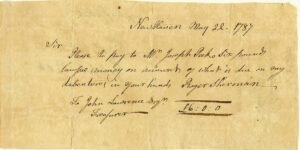 ROGER SHERMAN:  AMERICAN FOUNDING FATHER AND SIGNER OF:  DECLARATION OF INDEPENDENCE, ARTICLES OF CONFEDERATION,  AND THE CONSTITUTION.

SHERMAN, ROGER. (1721-1793). Lawyer, Statesman, and only individual to sign all four basic documents of American sovereignty: the Continental Association of 1774, the Declaration of Independence, the Articles of the Confederation, and the United States Constitution. Manuscript Document Signed, “Roger Sherman.” One page oblong octavo.  ”New Haven” May 22, 1787. Sherman requests the Connecticut Treasurer to:

“Sir, Please to pay to Mr. Joseph Peck Six pounds lawful money on account of what is due on any debentures in your hands. Roger Sherman
To John Lawrence Esqr Treasurer £ 6:0:0″

Roger Sherman was born at Newton, near Boston, on April 19, 1721. When he was two, his father took the family to what was then a frontier town, Stoughton. Sherman had only informal schooling past grammar school and began his career as a shoemaker, but was blessed with the combination of an active thirst for learning, and access to a good library owned by his father as well as a Harvard educated parish minister, Rev. Samuel Danbar, who took him under his wing. He was a professor of religion for many years, and engaged in lengthy correspondences with some of the greatest theologians of the time. In 1783 he and Richard Law were appointed to massively revise the confused and archaic Connecticut statutes, which they accomplished with great success. In 1784 he was elected Mayor of New Haven, which office he held until his death, and was the only individual to sign all four basic documents of American sovereignty: the Continental Association of 1774, the Declaration of Independence, the Articles of the Confederation, and the United States Constitution. Thomas Jefferson is quoted as having said about him, “That is Mr. Sherman of Connecticut, a man who never said a foolish thing in his life.”  Joseph Peck, the recipient of this draft, was a resident of Connecticut, and son of the Elder and Deacon of the 1st Presbyterian Church in Newark NJ. John Lawrence was also a Connecticut resident and served as Treasurer from 1769-1789.