“WHEN HE SAYS, ‘I FURTHER SAID THAT OF MCKINLEY WAS A GARFIELD OR A BLAINE’, I WOULD HESITATE TO COME OUT AGAINST HIM.  HE COULD HAVE ONLY HESITATED TO TRY CONCLUSIONS WITH BLAINE OR GARFIELD.  HE WOULD NOT FEAR TO DO IT – NOT HE.  HE WOULD NOT DOUBT HIS ABILITY TO MEET AND VANQUISH THEM”.

“Dear Alien: Many thanks for your generous congratulations, and if I have made my friends at home rejoice, I am quite satisfied. There is nothing remarkable in the speech. Whatever virtue it has, was occasioned by the occurrences in the House. I intended to write you about political matter but have been so occupied as to necessitate the delay.  Mr. Anitman’s letter I have read with great care, it is a strong and manly letter- one he can stand by, for it carries its verity upon its face. I am always willing to defer to him, as to questions of policy. He makes no mistakes. Lambie’s letter I have also read- It is a square denial of Mr. Antleman’s allegations, but is full of inconsistencies, and tinctured with a note of presumption. When he says, ‘I further said that of Mckinley was a Garfield or a Blaine’, I would hesitate to come out against him. He could have only hesitated to try conclusions with Blaine or Garfield. He would not fear to do it- not he. He would not doubt his ability to meet and vanquish them but could have been reluctant to have done it. I need not proceed further, you have pondered the letter carefully and know its foibles better than I. Gelleshies’ editorial on Anitman asserting that he made an admission in his office, ought to be contradicted. My recollection of that visit of Mr. A. to Gelleshies in the spring of 1880 as the former told it to me. Gelleshies wanted Mr. Anitman to promise him that I would give him the Post Office as a condition of his support, which Mr. A. scornfully declined. He is aware Lambie was in the bargain business- a remarkable coincidence. Lambie’s suggestion of haste on the part of Mr. Anitman in publishing his letter and Lambie’s delay to publish until the districts are arranged, is rather inconsistent with his letter to Mr. A. of March 6.  Whenever he says ‘I wrote to McKinley a day of two ago and when I get his answer, if he denies to me the agreement I shall publish all evidence I have of it’.  He declares in another letter that Anitman took part in the work to induce him not to be a candidate. It seems to me now that whatever else is published upon the subject except Mr. A’s denial of Gelleshie’s allegation, Mr. A. can consider some disclaimer should be made sometime or else it will be taken as admitted. It seems to me a position is impossible. I am glad to have notes that you did not publish the letters, that was the right course. I have written in a great hurry and I fear incoherently, but you have long been accustomed to me incoherence, that you will take to my meaning. I once more thank you for your congratulations and my gratification with what you say of matter generally. With sincere regards for yourself, and your friends. Yours faithfully, Wm. McKinley, Jr”.

A superb, political letter of significant length from McKinley’s pen. 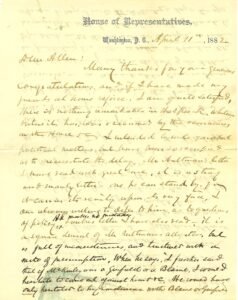