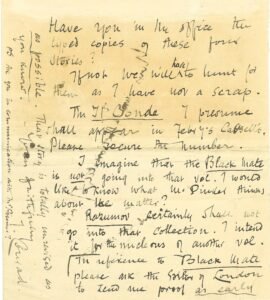 “Dear Mr. Moore,  The copy of the Vol of short stories is all written and most of it is serially published, except 2…Duel and the story of Il Conde – the corrected proof of which for Cassell’s May I sent you last evening.

I have text of Duel (in slips) ready for the vol by me.

But I haven’t got the others viz:  The Strong Man (Pall Mall), the Anarchist and the Informer (Harpers), The Brute (by Chronicle Xmas no 1906).

Have you in the office the typed copies of there four stories?  If not we will have to hunt for them as I have not a scrap.

Il Conde I presume shall appear in February’s Cassells.  Please secure the number.  I imagine that the Black Mate is not going into that vol.  I would like to know what Mr. Pinker [his literary agent] thinks about the matter?

Razumov [central character in Conrad’s Under Western Eyes] certainly shall not go into that collection.  I intend it for the nucleus of another vol.  In reference to Black Mate please ask the Sailor [?] of London to send me the proof as early as possible.  That story as you know is unrevised as you know.

P.S.  Are you in communication with Mr. Pinker?”.

A simply wonderful Conrad letter, with excellent literary associations that mention by name, five of Conrad’s better known literary works, and alludes to his main character in his novel Under Western Eyes.