“My dear Mr. Main Your New Year’s affectionate greeting was very sweet & welcome to us. I missed nothing comical & cheering in your letter except some assurance that this epoch finds you in outward peace & comfort as well as in inward steadfastness & joy in all goodness. It is your general fault to say nothing about that more solid measurable self which, however inferior & troublesome, is yet an inseparable companion of the more spiritual Alexander Main. I trust that you are free from domestic trouble & that your days are passed in satisfactory work.

On the other hand you usually want to know our bodily, & I can tell you now that we are both unusually well, having escaped cold in spite of the severe weather which has made victims of so many delicate & elderly persons. Mr. Lewes’s second volume is very nearly through the press, & he is already mustering with great effort the stores of long gathered material for the psychological portion of his work.

You have probably heard from Mr. Ritter lately & have received his brochure of translations from some of the extracts made by you – translations which seem to me both careful & frequently felicitous. He sent me this little token with a charming letter yesterday, which lay along with yours to gladden me when I went down to lunch. There is a quite peculiar grace in his letter-writing –do you not think so?

This is the fourth year, I think, since your first letter, asking about the pronunciation of Romola, reached me in the country. How the little twig planted there has burgeoned & blossomed! The best of blossoming being as you say the spiritual relation of conscious and sympathy.

I want very much to be assured of your perpetual striving after excellence in all such ways as your life offers a path for. Because your excellence in anything is likely to bear fruit after our work is finished. You know I care as much for what is called private work as for public work & believe in its incalculable efficacy.

The minute hand of my clock tells me that I ought to be writing something else. This hasty note is my good for the true sign it gives of my constant regard & gratitude for your affectionate remembrances. Mr. Lewes is below at his desk, but he has always friendly messages to you in his heart. And I am as always Your Sincere & Affectionate friend, M.A. Lewes.”

In addition to containing a fine reference to Eliot’s fourth novel, a historical work entitled Romola, this letter also offers some insight to Eliot’s ‘marriage’ to the philosopher and literary critic George Henry Lewes. In 1854, Eliot and Lewes, then in an open marriage to Agnes Jervis, began to live together. While affairs were not unusual in Victorian society, the fact that Eliot (now calling herself Marian Evans Lewes) and George Lewes openly admitted to their relationship was view as scandalous. In addition to this fine content, the recipient of this letter, Alexander Main, an ardent Eliot enthusiast and friend of the author, published numerous editions of Wise, Witty and Tender Sayings of George Eliot with the unusual benefit of the titular author’s blessing. 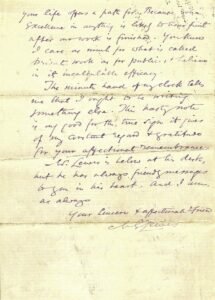