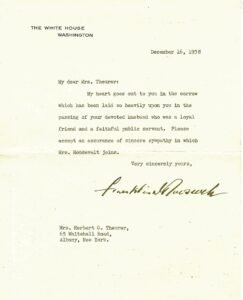 ROOSEVELT, FRANKLIN DELANO.  (1882-1945).  Thirty-second President of the United States (1933-45).  Typed Letter Signed, “Franklin D. Roosevelt”, as President, on imprinted pale green The White House stationery.  One page, small quarto.  Washington, D.C., December 16, 1938.  Excellent condition.  Accompanied by original The White House envelope addressed to “Mrs. Herbert G. Theurer, 65 Whitehall Road, Albany, New York”, with purple, three-cent stamp and postal cancellations.  [Mr. Theurer served as postal inspector for President Franklin D. Roosevelt from 1933 to 1938. He was personally responsible for all mail received and sent by the president, and accompanied him on his travels in the United States and abroad.]   Roosevelt writes: “My dear Mrs. Theurer: My heart goes out to you in the sorrow which has been laid so heavily upon you in the passing of your devoted husband who was a loyal friend and a faithful public servant.  Please accept an assurance of sincere sympathy in which Mrs. Roosevelt joins.  Very sincerely yours, Franklin D. Roosevelt”.  An attractive, boldly signed, one page example, as President.