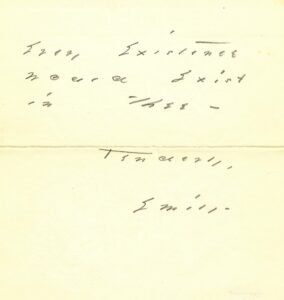 ‘THOUGH EARTH AND MAN WERE GONE AND SUNS AND UNIVERSE CEASED TO BE AND THOU WERE LEFT ALONE, EVERY EXISTENCE WOULD EXIST IN THEE’

DICKINSON, EMILY.   (1830-1886).  American reclusive poet; unrecognized in her own time, yet now praised for her style and brilliance, and the integrity of her vision.  Exceeding-rare, and highly important Autograph Letter Signed, “Emily”, in pencil.  Three pages, octavo.  [Amherst, Autumn 1884], to Mrs. Samuel E. Mack.   In very fine condition.   She writes:

“It was very dear to see Mrs. Mack.  A friend is a solemnity and after the great intrusion of Death, each one that remains has a special pricelessness besides the mortal worth – I hope you may live while we live, and then with loving selfishness consent that you should go –

Though Earth and Man were gone And suns and Universe ceased to be And thou were left Alone, Every Existence would Exist in thee—

Her letters are of extreme rarity.  In our long career, we have owned just 3 letters of hers, with this being the most significant by far.   Our letter is published in: The Letters of Emily Dickinson, edited by T.H. Johnson, #940, [Cambridge:  Harvard University Press, 1958].  Accompanied by 4 additional letters from her immediate family:  A 2 page ALS, and 3 1/3 page ALS of her father, Edward Dickinson, written to Samuel E. Mack about his mortgages on The Homestead [the family house];  and 2 letters from her sister, Lavinia Dickinson, [who was one of the most significant influences in her life] written to Professor C.S. Mack MD.  One is 8+ pages, and one is a single page.  [These alone are incredibly valuable sources of information, as the Mack’s bought Emily’s grandparent’s home The Homestead in 1833, and rented a portion of it back to the Dickinson’s].

We cannot over emphasize the importance of this letter and its accompanying materials.  Simply: one of our “Best of the Best”.