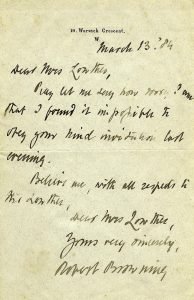 “Dear Mrs. Lowther, Pray let me say how sorry I am that I found it impossible to obey your kind invitation last evening.  Believe me, with all respects to Mr. Lowther, Yours very sincerely,  Robert Browning.”

Lady Constance Gladys Herbert was the wife of St. George Henry Luther, the fourth earl of Lonsdale.  He died when in his late twenties and Lady Herbert remarried, becoming the Countess de Grey and the Marchioness of Ripon.  Described as a strikingly handsome woman, she was the friend of Edward VII and Queen Alexandra.  A fine example for framing or display.