“Dear friends,  I some expect to send an agent from this place to examine my lands in Franklin, Hudson, and Twinsburg, being in all (including the one hundred acres in Twinsburg bought of Oliver) about five hundred acres.  I want Oliver to have properly executed deeds, of the Twinsburg land executed, and recorded without delay.  If Milo L. Hudson’s heirs, or executors, have or will cause the deed in Mr. Frederick Baldwin’s hands to be put in my possession upon my paying the amount the arbiters award called for on the 23rd February last being some $35, or 40 dollars I want to have that money made out some way for me till I return, have it paid them and that deed immediately put on record.  Should an agent come out, I shall refer him to you, and wish to have you go on to the premises with him without fail, and use as good an influence with him in my favour as to showing the land, its location, and value, as you can consistently with a good conscience.  If you will attend to the business for me with promptitude, you will confer a special favour and shall be promptly rewarded by your brother and friend   John Brown”.

Five years before writing this letter, John Brown established a project to educate young African Americans in Pennsylvania, where he lived with his family.  The next 20 years of his life were devoted to continuing that education and pursuing other abolitionist ventures.  In 1855, he and five of his sons joined other Northerners in the “war” against the pro-slavery Southerners, at which time many members of both sides were killed during the fighting.  Four years later, Brown decided the only way to permanently end slavery was to stop it by force.  On October 15, 1859, he and 18 others seized the U.S. arsenal at Harper’s Ferry and took control of the town.  The next day, marines under the command of Colonel Robert E. Lee surrounded Harper’s Ferry and ousted Brown and his men.  During the struggle, ten of Brown’s compatriots, including two of his sons, were killed.  Wounded himself, Brown was arrested and charged with murder and treason; he was convicted and hanged for his crimes in December of 1859. 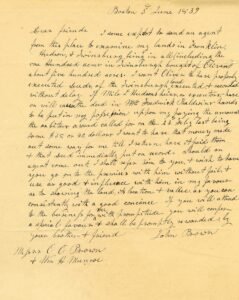