FRANKLIN PIERCE URGES THE APPOINTMENT OF A NEW SHERIFF IN NEW HAMPSHIRE, STATING THAT THE PETITION SUPPORTING HIM:  “ALREADY BEARS THE NAMES OF SOME OF THE BEST DEMOCRATS IN THE COUNTY.”

“Dear Sir, Our friends in this place have started a petition in favor of Jesse Duncklee Esq. to succeed Jacob Whittman Esq. (whose second term expires June next) as sheriff of this county.  I consider Mr. Duncklee a sound politician and a man of talents and integrity and it seems to me that a better situation for the office cannot be made.  The petition will probably be presented to you before long and I hope you will be disposed to strengthen it with your signature.  You will perceive that it already bears the names of some of the best democrats in the county.  Among others, Judge Tuttle, Hon. Luke Woodbury and Judges Colby and Cary.  It would afford me great pleasure to see you at Hillsboro and I hope something may occur to bring you that way.  In much haste, yr friend and servt, Fr. Pierce”.

John Hardy Steele (1789–1865), the recipient of our letter, served as the 19th Governor of New Hampshire from 1844 to 1846;  a Democrat in a town that was predominantly Whig in its politics, Steele was popular enough personally to win election to the New Hampshire House of Representatives in 1829;  from 1830 to 1838 Steele served as Peterborough’s Town Meeting Moderator, and was a founder and President of the Peterborough Savings Bank;  he provided letters of introduction to President Polk and members of Polk’s cabinet for his friend Jesse Carter Little, a Mormon pioneer who sought government assistance to enable the Mormons to begin settling in Utah.  Pierce and Steele remained close friends and political allies throughout their lives. 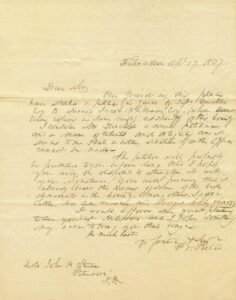