“Upon the attestation by person in charge that the persons names below have successfully completed the curriculum of the School for Officers in 1912, We have Most Kindly bestowed upon them the title of Cavalier of Our Imperial and Royal third degree Order of St. Stanislav: of the Aviation Section of the Air Fleet – Lieutenant Sergei Golovin of the 4th Battalion of Combat Engineers of Adjunct General, Count Totemben; and of the Aviation Section of the former Aeronautic, now Military Aviation school/academy – Lieutenant Ivan Chikhutov of the 6th Siberian Battalion of Combat Engineers, in consequence of which We Instruct the Capitulum to issue to these cavaliers the chatters and insignia of the Orders. –  Nilolai. ”

A remarkable ‘survivor’ from this often-troubled part of our world.  A fine addition to any collection of Tzarist, Russian or world history. 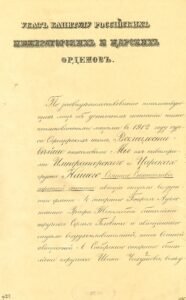