LIEUTENANT COLONEL ZACHARY TAYLOR ACKNOWLEDGES ORDERS FOR HIM TO TAKE PART IN A COURT MARTIAL TO BE HELD IN CINCINNATI, OHIO

“Sir, I have the honor to acknowledge the receipt of Orders No 25 detailing me as a member of a Gener[al] Court Martial to convene at Cincinnati, Ohio, on the 7th June next.”

Just a fine example for the collector of Presidential letters. 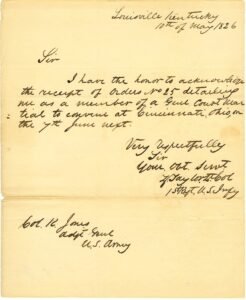