“NO HIGHER EULOGIUM COULD HAVE BEEN PRONOUNCED ON ANY MAN THAN TO SUGGEST, THAT HIS NAME MIGHT BE JUSTLY ASSOCIATED WITH THOSE OF JACKSON, VAN BUREN AND WOLF:     MEN WHO, IN THEIR SEVERAL SPHERES, HAVE RENDERED THE GREATEST SERVICES TO THEIR COUNTRY AND CONTRIBUTED SO MUCH TO ITS PROSPERITY AND GLORY…”

“Gentlemen, I did not receive, until this morning, your kind invitation in behalf of the Democratic Citizens of the City of Philadelphia to be present at their celebration of the approaching anniversary of the victory of New Orleans.  Rest assured that I feel, with profound sensibility, not only the honor of the invitation, but the flattering terms in which it has been communicated.  However much I might have desire to be with you on this memorable occasion, it would now be impossible; even if my public duties did not demand my presence in the Senate.  The terms in which you address me on the part of your constituents I feel to be altogether undeserved.  No higher eulogium could have been pronounced on any man than to suggest, that his name might be justly associated with those of Jackson, Van Buren and Wolf: men who, in their several spheres, have rendered the greatest services to their country and contributed so much to its prosperity and glory.  With sentiments of the highest respect I remain truly yours, James Buchanan”.

James Buchanan, serving his first term as a United States Senator in 1835, had distinguished himself as a young man in the War of 1812. One of the first volunteers from the state of Pennsylvania, Buchanan was among the brave soldiers whose defense of the busy port city of Baltimore inspired Francis Scott Key to compose the poem that would one day become the nation anthem of the United States, “The Star-Spangled Banner.” Following this unsuccessful siege, British ships under the command of Admiral Cochrane headed south towards the strategic southern port of New Orleans. Acting quickly, the US government ordered Major General Andrew Jackson to take command of the city’s defense. When the British launched their offensive on January 8, 1815, they suffered devastating losses from the first.  In the first 25 minutes of the battle, 2000 British foot soldiers were lost as they advanced across a quarter mile of open ground. Occurring several weeks after the Treaty of Ghent was signed, Jackson’s decisive victory at New Orleans may not have had an effect on the political outcome of the war, but it played an undeniably important part in bolstering the confidence of the American military and citizenry. As our letter shows, the War of 1812 fast became a celebrated historic and symbolic triumph for the United States; the nation had battled the powerful British Empire to a standstill.

Buchanan is not known for writing an exceptional letter, or stating a notable position in writing with any frequency.  However, this letter is the antidote to those shortcomings.  Simply a letter worthy of inclusion in a set of Presidents that has content and character as its foundation. 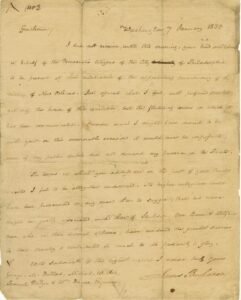