WODEHOUSE, SIR P[ELHAM] G[RENVILLE] (1881-1975). English writer of nearly 70 novels, numerous short stories, and musical theater; his best known and most beloved characters being: Bertie Wooster and his valet Jeeves; the immaculate and effervescently talkative Psmith; Lord Emsworth and the Blandings Castle crew; and the disaster-prone opportunist Ukridge. Wonderful and enlightening small archive of:  Five Letters Signed to American Humorist Will Cuppy, being a mixture of Typed Letters Signed, and Autograph Letters Signed.  These letters date from 1931 to 1948, and are accompanied by three letters from Ethel Wodehouse [whose letters are rarely encountered].  All letters are in very good plus condition, though some have residue on their versos from previous mounting in an album.  These fine letters are now housed in a custom made, dark blue leather quarter-morocco clamshell box.  Wodehouse was a good friend and unabashed admirer of Cuppy. In a long one page typed letter on MGM stationery, dated March 9, 1931, which is signed in full, Wodehouse writes:

“I have been meaning to write to you for ages, to tell you how much I enjoyed HOW TO BECOME A HERMIT, but every time I was going to do it another book of mine came out and I thought I had better put it off, for fear Cuppy, the reviewer might suspect something phoney about a tribute paid to Cuppy, the author…I can franklyaand freely say the Hermit is just about my favorite book.  I can’t claim to have actually bought it, for I was given it as a present, but I have read it six time already, and intend to go on reading it at intervals for the rest of my life…Are you going to write another? If not, I shall have to content myself with the regular reading of your detective story reviews…Remember me to the Good Spinach Eater and tell her how bucked I was at what she wrote about me the other day…”

“…I got a lot of laughs out of Coconut Oil.  The Calloused Eye was one of our weirdest, wasn’t it. [?] Would you rather spend a week-end with the Willett family, or with the Glaces?.  Of course I shall be simply delighted to write a review of the animal book, and I only hope it will do something to help…I don’t know if it’s the same man, but somebody writing on the same page slated Big Money in a very nasty fashion…”

A good two page holograph letter on the letterhead of the Chateau Frontenac in Quebec, written  on Oct 28, 1931, regarding his sending a review of  ‘How to Tell Your Friends from the Apes’, New York: Horace Liveright, Inc. with Introduction by P. G. Wodehouse. (1931), arguably the book which marked Cuuppy’s most celebrated literary success, follows.  Wodehouse writes:

“I sent the review of  [How to Tell Your Friends from the] Apes to Paterson.  I did it on the New Yorker articles, as I had to leave earlier than I thought.  I sent it…registered from Montreal the night I left.  I handed it in at the hotel desk and paid for it, but it was too late to send it off that night, so I have no receipt.  If they didn’t send it off, let me know [I’m arriving] at Constitutional Club…London…and I’ll do it again.  I can remember all except the quotations…”

In a long one page letter, Jan. 10, 1948, signed “Plum” [his nick-name used only in the closest of his personal associations], Wodehouse humorously discusses inviting Cuppy for lunch, and the dental work he didn’t feel he needed.

“…I pride myself on the fact that at the age of sixty-six I have not a single false tooth in my head and I don’t want to spoil my record.”, and briefly commenting on a Nicholas Blake book he is reading ”…with a slight feeling that Nigel Strangeways, like Philo Vance, wants a kick in the pants.”

The final letter is a shorter typed letter, dated May 28, 1948, and signed “Plum” in ink, where he thanks Cuppy for:

“…that nice review of Spring Fever and also the book….I’m very fond of Fen and am looking forward to reading his latest adventures.  Russell, Bless him, gave me a fine boost yesterday on the radio.  I don’t know how the book is going, but was pleased that Macy’s were advertising it.  I am hoping that their splash may shame Doubleday into mentioning Spring Fever….Everything satisfactory in the Wodehouse home…The ‘Play’s the Thing, on the other hand, is doing great business and looks set for a long run….”

These letters would make a fine addition to any collection of Wodehouse, and their custom made leather box has plenty of room to add more letters when and should they become available! 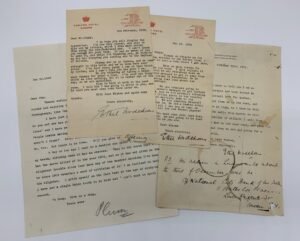 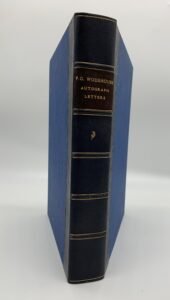