“MAYBE  LOVE, SWEET  LOVE IS DIFFERENT  – LIKE HELL IT IS…

THE WRITER TAKES THE MORE DEVIOUS ROUTE, HE ACKNOWLEDGES HIMSELF TO BE NOT SO PHYSICALLY COURAGEOUS, NOT SO ELOQUENT AS TO BE ABLE TO MOVE MOBS TO REBELLION – HE WRITES, HE PLACES HIS LITTLE MAGIC POWDERS IN THE MOST STABLE FORM THAT HE KNOWS OF, POETRY AND WISTFULLY – SUCKS HIS OWN COCK,   PERHAPS.  I DUNNO.”

“Dear Fred: Nothing but God’s busy little minutes has kept me from answering your last long before this. It was an impassioned letter. How are things coming? Coming or going? I ain’t better either way, just watching and waiting – as in the case of the war. Did I say war?

Much that you said has universal significance and what in hell’s a guy (or a girl) to do about it? It’s sort of a test of genius, a test of character, a test of courage and intelligence and who has the answer. Certainly not the bald bastards of the ever living church. All that the Church does is take sides in its own interest and then, ten to one, does it on the side – plenty. Or if not it ain’t for anything but a lack of courage. And so the old wheel spins.

Even Dante, if I have been rightly informed, who loved his Beatrice beyond all limits (tho’ she grew up to be another man’s wife and he never had her) did all the screwing he wanted to on the side, enough to satisfy him at least. But what about the other girls who may have wanted him to settle down and help them feather their nests? He didn’t have time for that. He fucked himself all up with poetry instead of allowing himself to get tied – and used the divine Beatrice as a stooge to beat off the others. If it’s the mere truth you want there it is.

Shakespeare got himself tripped up when a kid – by a woman eight years his senior, she probably thought him a cute kid as he must have been a hot one. Her brothers, they say, got him by the seat of the pants and made him marry her. That’s what gave him such an eye for realities.

But why pick on the famous boys, think of the shits that have done the same, both male and female. And think of those who were not shits. In other words you does what you have to do if you have the guts to do it. Or you don’t if you have the guts not to do it and one answer is as good as another in the end so long as you get out of it what you want and you don’t let someone else make a monkey out of you for his or her own purposes which don’t happen to be your purposes.

I always remember the story of Thos Hardy. His wife was a bitch, maybe it wasn’t her fault the old boy may not have been as interested in her as he was in his writing. One day she got home from a fucking party just as Thom was eating breakfast. She was a little taken aback, maybe plastered at the time and started to say something by way of explanation. He sushed her by saying, If you had been a minute later, my dear, I’d have eaten your sausages – which the maid had placed on the breakfast table expecting the mistress to come down with her husband.

So what did happen? Havelock Ellis says, If you say no you strengthen your character. And if you say yes you broaden your experience. Somebody ought to get shot on the home front just to show the boys they haven’t got all the courage in their baskets out there.

All I say is that it’s for some and not for others. But the difficulty remains, who’s who? And if you don’t what does it make of you? We all know what it makes of you if you do.

One things sure, it ain’t for sale in the five and ten.

And sad to relate, some things can’t be had without it.

As far as I can see, as might be expected, it’s the mind that is the deciding factor. If, for you, there is no way to achieve that which is for you a complete sense of personal fulfillment in this world, then for you, there is nothing else to do but that which fate or the experience of a lifetime sets before you as your dish – even if it’s murder. To be a man (in your own eyes) you’ve got to eat it, do it, work through it to the other side so that you can look about and say I’ve made that experience mine, I’ve not funked it but faced it and done it as I wanted to. Maybe, of course, after you’ve done your deed, you may look back and say that wasn’t what I wanted at all, that wasn’t as all what I wanted. But you’ll never know until you’ve tried and no amount of chiseling and sneaking around for half-assed satisfaction will convince you that one bold deed will (or might) do, even tho’ you regret it. Most of us haven’t got that much guts.

Makes me think of Jim Laughlin: when the war started he sent me some ‘poems’ about what we all know, how the capitalistic bastards of the world had framed us all and brought the war on, the ‘usurers’ and all the other. What he had written wasn’t poetry, it was just plain sermonizing but Jim liked the stuff and asked me what I thought of it. I said, As poetry its terrible. BUT as plain statements of fact it has some virtues. HOWEVER, if that’s the way you feel then there’s only one thing to do, get out front and say it, right in front of the Public Library on 5th Ave and take the consequences. I told him we had all done our stinking little bests to prevent the war. We had failed. All right, then be a St. John the Babtist[sic],  A Christ and keep saying what you have always said and TAKE THE CONSEQUENCES on your own hide. Otherwise acknowledge that you’re beaten and join with your kind in defending themselves.

But maybe love, sweet love is different – like hell it is.

The writer takes the more devious route, he acknowledges himself to be not so physically courageous, not so eloquent as to be able to move mobs to rebellion – he writes, he places his little magic powders in the most stable form that he knows of, poetry and wistfully – sucks his own cock, perhaps. I dunno.   More power to you and Betty.   Bill.”

In a holograph postscript Williams adds: “Paul’s at sea again, Bill’s been in the hospital in Maryland – out now.” 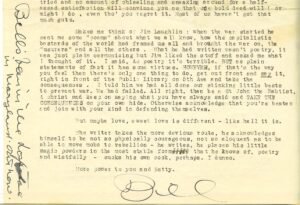 Just superb literary content!  This letter is one of the finest, if not the finest, from William’s pen we have encountered and certainly would be a corner stone for any collection of his works, or an absolute stunner for the modern literature collector!  One of our “Best of the Best”.™