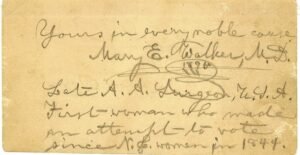 THE ONLY WOMAN TO RECEIVE THE MEDAL OF HONOR

“Yours in every noble cause

First woman who made

an attempt to vote since

In 1855, she earned her medical degree at Syracuse Medical College in New York, married and started a medical practice. She attempted to join the Union Army at the outbreak of the American Civil War and was denied. She served as a surgeon at a temporary hospital in Washington, D.C. before being hired by Union Forces and assigned to Army of the Cumberland and later the 52nd Ohio Infantry, becoming the first female surgeon in the US Army.  She was captured by Confederate forces after crossing enemy lines to treat wounded civilians and arrested as a spy. She was sent as a prisoner of war to Richmond, Virginia until released in a prisoner exchange.  After the war, she was approved for the Medal of Honor, for her efforts to treat the wounded in battle and across enemy lines during the Civil War. [wikipedia].   Just an exceptional example of a woman whose story and accomplishments should be known to every US citizen.