“[YOU] WOULD BE THE BEST PERSON TO FILL THE GOVERNORSHIP OF BRITISH EAST AFRICA…A VAST NATIVE POPULATION, OF A CONSIDERABLE ASIATIC INFUSION, & OF A SMALL, BUT ALREADY POWERFUL COLONY OF SETTLERS…[WITH] GREAT POSSIBILITIES.”

CHURCHILL, WINSTON, S. (1874-1965). Prime Minister. Significant Autograph Letter Signed “Winston S. Churchill”, as President of the Board of Trade. 3½,  octavo pages on blindstamped “Colonial Office” seal embossed stationary, February 28, 1908.  Marked ‘Secret’ in Churchill’s hand at top.  To Lord Robert Cecil, inquiring of him privately if he is interested in the Governorship of British East Africa, now Kenya. Though Churchill did not have the authority to appoint Cecil to this position, he wished to inquire of the measure of interest before he submitted his advice to the Secretary of State. Churchill writes:

“I have for a long time been wondering who would be the best person to fill the Governorship of British East Africa. The post is one of unusual difficulties & opportunities. The problems of a vast Native population, of a considerable Asiatic infusion, & of a small, but already powerful colony of settlers, are combined with the whole process of economic development in a country of great possibilities. I do not know anyone who has ever seemed to me more capable of dealing with their various issues than you. I mentioned your name to Lord Elgin the other day in this sense; and he showed himself not at all unprepared to consider the suggestion. Before I precede any further I should like to know privately & for my personal information only, what you think of the plan.  I have no authority to make you any offer and the decision of the appointment is wholly outside my hands. But it would be a guide to me in any opinion I express to the Secretary of State, if you would write to me and let me know your personal wishes. I hasten to add that the appointment is not now vacant and I so not know when it will become so.  It is therefore only a very speculative inquiry that I venture to make of you. Believe me. Yours sincerely, Winston S. Churchill.”

The letter penned just four days after Churchill left the office of Under-Secretary of State at the Colonial Office, and now appointed President of the Board of Trade [equivalent to U.S. Secretary of Commerce.] Churchill’s desire to place Cecil in the Governor was not to be.  The appointment went to Sir Édouard Percy Cranwill Girouard. Lord Cecil, later Lord Cecil of Chelwood and one of the architects of the League of Nations, was at this time serving as a Conservative Member of Parliament. Cecil, decades later, was later awarded the Nobel Peace Prize. The Imperial British East Africa Company was chartered in 1888 to administer Kenya and in 1895 the British government formally took over the territory, which was renamed the British East Africa Protectorate. By 1908 the British government had brought the southern half of present-day Kenya under its control. 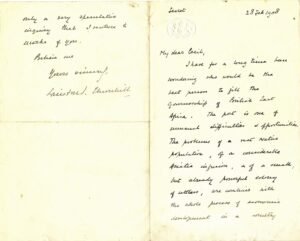