“I see your letter of the 1 st night before last; yesterday made a special visit to the August Medical Board in N. Y. When I delivered them such an oration upon the merits of my Cousin Robert, that I will be bound they will not soon forget. I found them in full session, jesting aside. Said all in his behalf that you could wish which I know he well deserves. I very much regret not having seen him when in N. York that I might have introduced him in person to D. Mouer with whom I am well acquainted & have the highest estimation, I have in any other manner in my power Served his Convenience. Do give him a good Scolding Cousin Anne for not having come down to see us, or at least notified me that he was in N.Y.

I heard from Wms Carter on a recent visit of duty to Phil. Of his having come to N.Y. to undergo his examination; & on my first visit to the city after my return; I called at the Medical office to leave his address, but he had gone. It will probably be some time before he learns the result of his examination, as the report of the Board to the Secy of War will not be made until they get through with all the Candidates, & until that time their proceedings are considered confidential. I do not think however he need be uneasy. There were about 60 whose names were presented to the Board for examination. Probably about a third of that number will withdraw their applications, so that the labors of the Board are about half now. They are at this time engaged in examining some ten candidates for appointment to go to California with Col. Stevenson’s Regt. of Volunteers, & are consequently taken off from the Candidates for the Regular Army. Should I hear of their official report in this latter case, before I have reason to believe of its having been announced to Robert, I will let you know.

And now Cousin Anne about your long promised visit to Fort Hamilton. I have been looking so long for your letter calling me to meet you at Jersey City that I am almost in despair, & had had told my sister Anne. The very day of the reception of your letter, that I should the following mins while to remind you of it. If Mr. Wickham cannot come with you, why cannot you , the girls seen only by yourselves. It is so very easy & can be so specific accomplished. The eve of the Mond on which you leave Washington you can beat Fort Hamilton & you can leave all your — dresses behind, which will reduce your luggage & save you all trouble. I will meet you at Jersey City, drive you down by moonlight along the banks of the beautiful water. Come while the moonlight lasts. The sea breezes & salt bathing will be very refreshing & the fields & com are as fresh & new as on the banks of the Pamunkey. [?] This will probably be the last summer I may be here.  There are great many pretty rides on the Island & I want to show them to you.

Anne & Mr. Marshall leave us next week, for West Point & will return from there to Baltimore. I am very much afraid that my dear mother will not get on this summer. Tell Uncle Wms that he must come on with you, His room is all ready for him. I saw Charles & his wife while in Phild.  She is a sweet creature.

Anne & May send much love to all your household. Although the former is still feeble, she is very much improved & now walks all about. Write to me two days before you leave home that I may be sure to receive your letter in time. Adieu dear Cousin Anne & believe me with much love to all, Very aff[ectionately] yours,  RE Lee.”

As already stated, Lee letters with personal family content, of this length, and from this period in Lee’s career are not often encountered.  There is a ‘lightness’ of spirit and ‘gleeful’ character revealed in this letter, which is not found in his letters written post 1861.  A good letter for the collector specializing in him, or military leaders of that period in American history. 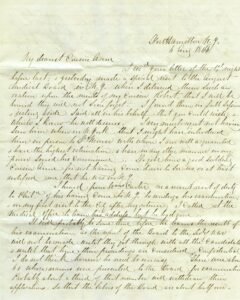