“One hundred and ftfty years ago an expeditionary force from France, led by some of the most illustrious Frenchmen of their time, brought aid and succor to our struggling infant nation. Lafayette, at a later date, visited this county, toured it and received the acclaim and welcome of an appreciative nation. In 1917 an 1918 Frenchmen and Americans were again comrades in arms. In extending to you, representative of France, a most hearty welcome, I am not only expressing my own personal feelings but also that of all our people. Herbert Hoover”

Pristine, unfolded condition!  Choice, and rather rare as such! 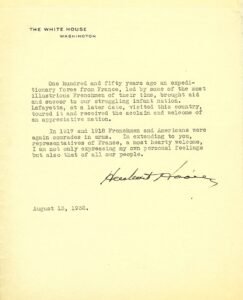