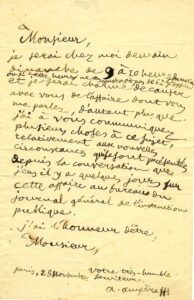 AMPÈRE, ANDRÉ M.  (1775-1836).   French mathematician and physicist, considered the father of electromagnetism, known for his important contributions to the study of electrodynamics; the “amp”, the base unit of electrical current is named after him. Scarce Autograph Letter Signed, “A. Ampere,” in French.  One full page, octavo.  Paris, November 28, no year.  To Mr. Paul D’Aubree.   Ampere writes:

“Sir, I will be home tomorrow Sunday from 9 to 10 o’clock in the morning or if that time is not convenient from 6 to 7 o’clock in the evening, and I will be happy to talk with you about the matter about which you are speaking all the more so since I have several things to communicate to you on this subject, relative to new circumstance which have presented themselves since the conversation which I had a few days ago on this matter at the office of the journal general de l’instruction publique. I am honored to be, Sir, your very humble servant. A. Ampere”

Very fine condition, and a worthy addition to any collection of early scientific pioneers.